If you study the body of laser therapy research, you will see that dosage is THE single most important factor in determining outcomes in laser and light therapy, but the practical application of dosage is surrounded with lots of misinformation.  Some laser manufacturers don't comply with the core science, industry standards or best practices and instead attack or warp the science to justify their product. Some very low-power manufacturers say that dosage does not matter and that the best way to solve health problems is by pulsing the laser. This is partial true. Sometimes pulsing is the solution, but usually dosage is the bigger part of the solution. That is why we say the best systems do both.

If a system delivers too low a dosage, it is not bad. It just takes more treatments to get to an accumulated dosage to solve the problem. If the dosage is too high, we see better pain control and patients are happy but they don’t get the fastest long-term recovery that we expect when the dosage is optimum. In this analysis, we are looking at every detail we can control to get the optimum dosage for long term benefits.

Energy density is typically measured in joules/cm2 at the target depth. This is a 2-dimensional measurement of a 3-dimensional problem, but it is the only way to realistically estimate an appropriate energy density in a treatment area. Using this simplification, you can simple multiply the 2D treatment area by target density to get a total dosage at depth and adjust for several critical factors.  The European standards are typically from 4 j/cm2 to 8 j/cm2 so we will use this range for this analysis.

This formula gives us the total dosage that should be delivered to the damaged area. As the energy travels through the tissue, it is reflected, absorbed, transmitted and scattered (RATS).  Each wavelength of light has a unique RATS profile. Using the following graph, we estimate losses as the energy travels through tissue. In general, 808/810nm is the best wavelength to drive the energy deep. Research shows that it about 3 times better than 850nm and 30 times better than 980nm at traveling through tissue and still creating a photo-chemical response. Using the graph, we deturmine our wavelength efficiency. 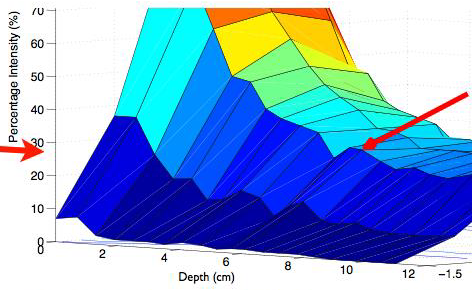 We also need to adjust for source efficiency. Lasers are coherent light, where each wave of light energy is pushing the next wave, allowing the energy to travel more efficiently through tissue. LEDs are noncoherent light so the energy is self-destructive.  We use 100% as the source efficiency for laser and typically use 1% to 10% for the efficiency of a LED light sources.  We don’t have an exact number for LEDs but in practice but we see that deliver rates must be much higher to accomplish the same results using LEDs.

Next, we will divide the "total dosage at depth" by factor for the wavelength efficiency to correct for losses getting to the damaged tissue and we get the target dosage at the surface where we will be applying the energy.

This give us a more practical number, the dosage that needs to be applied at the surface of the skin. It is really just common sense that larger patients and patients with darker skin, that absorbs the energy we want down deep at the surface, will need a higher dosage. For this reason, we have 2 scaling factors; the skin scaling factor and the size scaling factor.

Now, we have an optimum total dosage required to treat a specific problem at a specific depth in a specific person with a specific wavelength and light source.  Now, we can calculate the treatment time for the therapy

A1-watt laser will deliver 1 j/sec at the skin interface and A 10-watt system will deliver 10 j/sec. This means that more powerful systems does not provide better results, it provide shorter treatment times. If the deliver rate is too low,  treatment time are no longer reasonable so people just treat a realistic time (typically 20 minutes max) and they live with the slower pace of improvement.

In this case, let's do the math on a realatively easy case of an arthritic finger in light-skin average-size person using a 1/10 (0.1) watt 810nm laser. The target density is 4 j/cm2. Themaximum depth is 1.6 cm so we are still getting most of the energy to depth (80%) and the total damaged treatment area is 3 cm.
Although we will be moving the laser around the joint to shed light on the damaged area from every direction, we are still using a 2-D approximation of the damaged area so this is a simplification but it makes the calculations reasonable.
Here we see that most any laser can produce good results treating this type of condition. We would expect to reach a optimized dosage with short treatment times even with a class 1, 1m, 2 laser. This migth be why we see some good reviews for lower power system. They work great on the easier cases.

In this case, we are going to look at a tougher case where we are treating a damaged section of a low/mid back. Often times, damage to the spine creates problem in surrouding muscles as they shift to offset for the damage so the treatment area is quite large. (129cm2). We are targeting 4 joules/cm2 at a depth of 30 cm with an 810nm laser (efficiency = 20% of energy left at 30 cm). The laser deliver rate is 10 joules/sec (10-watt CW laser). The patient is large (size scaling factor = 1.1) and has olive skin (skin scaling factor =1.15).

If you use a primary wavelengths like 980nm, which research shows only 1% of energy reaches 30cm because of its absoption by water, then the optimum dosage must be 20 times higher or 60,000 joules. We see these really high-dosages built into 60 watt class-4 lasers which can still deliver that dosage in 16 minutes but this is a very wasteful process.

Then if we go to a lower-power laser, the treatment time is proportional longer so a 1-watt laser would do the exact same thing, but the treatment time would be 52 minutes. Since this is not a realistic treatment time, most practitioners with class 3b laser will do a lower dosage and see good but it will take more therapy sessions to get to sufficient accumulated dosage. This can be done by doing the therapy everyday instead of once a week.

The Range of Equipment

In general, lower-power systems work fine on some applications like shallow and small problems (arthritis in one finger for example) but might not ever accumulate sufficient dosage to fix larger, more complex and more serious problems (like a hip). Dosage is accumulated so eventually low power systems get the job done but users often quit if progress is too slow. In general, we feel this bad for the laser market because the substandard results (that you should be getting based on the science) create poor reviews that negative affect the adoption of the technology.

There was a great study that analyzed most of the laser therapy research with poor or no results and they found that all the “failed” programs delivers such a low dosage that they should have had no results. This was a positive confirmation that laser therapy works but only if they apply an adequate dosage.

At the other end of the spectrum, we have higher power machines that deliver very higher dosages. These higher dosages are associated with better pain control but that could be because cellular inhibition. This higher dosages don’t  destroy the ATP that was just created but it might overstimulate the cells until they become inhibited resulting in better pain control. In general, it seems better to have the dosage too high than too low because people are happier with higher dosages and they will stick with the therapy program. The following table shows the approximate dosages based on the class of the laser. The laser class is based on the ability of the system to do eye damage but there is an order of magnitude in dosage as you move up in each laser class.

Everyone has a different personal goal for their therapy. Some people mainly want pain control and others want to get peak cellular stimulation.  In this analysis, we are trying to get the peak cellular stimulation. The Arnold-Shultz diagram show that there is a peak in cellular stimulation. This is the point where we get the maximum photo-chemical reaction (mainly being ATP production) but no one yet has determined the numbers associated with the graph. We agree on the concept of the shape of the curve and that there must be too much at some point but we have little facts to publish. As you can see from this analysis, dosage can quickly get quite large and that is why the overall laser therapy is moving to more and more powerful equipment. More powerful equipment is not always needed but definite makes the therapy results more consistent and the therapy sessions easier to integrated into a practice.

Please contact us if you need more information about how we calculate dosages for the lasers that we sell and how we train people to use the our lasers.