There is a wide range of LED (Light Emitting Diode) and SLD (Super Luminescent Diodes) products that were created for the same applications as therapy lasers. These products can be successful in some applications but ,at this point in time, most of these system fall way short of the results of a real therapy laser because LEDs suffer from several major limitations. Some the manufacturers even have laser in their name yet they use 90% LED technology. Please make sure you check the specs on any product before you buy it and remember that LEDs only delivery a small portion of the energy into the tissue when compared to a true laser. We are working on an LED product. To make up for the lack of efficiency of LEDs, this system will be about 3,000,000 mW (3000 watts) so that even if we lose 90% of the energy, it will still be a 300 watt system.

When it comes to delivering energy to tissue, the entire process must be designed do minimize losses. Every system starts out with an available power (or ability to deliver dosage) as the energy travels through a medium, there are losses. If the energy is converted into heat, it cannot be converted in chemical energy so most therapy devices try to minimize the heating of the tissue. This is what make intra-red lasers different from infra-red saunas. Infra-red saunas are mainly photo-thermal and better lasers are primarily photo-chemical. Higher wavelengths of lasers suffer from the same problem. At 980nm and above, much of the energy is converted into heat and that energy can cause dilation to increase blood flow but it will not cause a photochemical reaction.

As the light travels through the a medium like tissue, non-coherent light (from sources like an LED) is more self-destructive than coherent light. If you throw a hand full of stones (noncoherent) at the same time into a still lake, the energy of the waves hits into each other and the energy is destroyed (self-destructive) so that only a small portion of the energy ever reaches the other end of the lake (deep tissue). If you throw one rock into the lake or time it just right to get multiple rocks in the lake at the natural period of the rock waves (coherent), it produces a set of coherent waves that can travel across the lake. If the waves sink up perfectly, you get a rogue wave that is bigger than any one of the single waves. When the peaks and the valleys of the sinusoidal wave are all aligned at a single period, it is additive but if they are out of phase, they destroy each other. Light reacts in the same way. Non-coherent light energy is more self-destroyed or less efficient at traveling over distances through a medium so we prefer coherent light energy when we need to push photonic energy through human tissue.

Because lasers are coherent and have a controlled divergence, they are the best at delivering photonic energy to deep tissue but there is still some excellent possibilities for LED systems. If the losses are too great, the system does not ever delivery the needed dosage.

LEDs
A light-emitting diode (LED) is a semiconductor light source with properties between an incandescent light bulb and laser. When an LED is switched on, electrons are able to recombine with electron holes within the device, releasing energy in the form of photons. The color of the light defines the properties of the light and the corresponding energy of the photons. Early LEDs emitted low-intensity red light (610-760nm) , but modern versions are available in a wider variety of wavelengths including the infrared wavelengths required for deep tissue penetration (the therapeutic window). LED light is non-Coherent (radiating in all directions) and divergent. Typical LEDs are designed to operate with 30-60 milliwatts [mW] of electrical power. LEDs can be switched fast but they can not be super-pulsed. The vast majority of devices containing LEDs are classified as Class 1 LED products but LEDs can fall under the same limitation of LASERs if the power density is high enough. Here we see an image from Wikipedia showing that the actual output of a red LED ranges from 600 to almost 700nm. 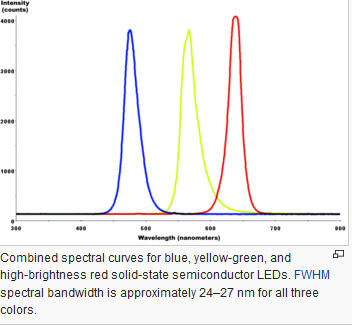 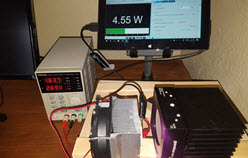 One really misleading part of LED systems is that many are rated based on the power consumption and not on the deliverable power output like we typically see with lasers. We have tested all the different lasers that we sell and they all produce the rated power at the emitter head. To the right, you will see where we tested a 50 LED array. This is the latest surface mount technology (which produces much higher outputs when compared to the older style LED buttons). In the picture, you can see that the LEDs are consuming closed to 50 watt of power but producing less than 10% of rated light energy when tested on our laser test rig. We are not sure if the company just cheated on the spec to sell more systems or if all LEDs have such inefficiency but this is something to watch out for if you shopping for cheap wrap-around therapy device or LED therapy systems. In addition to not being coherent, these system can be a small fraction of the spec when it comes to delivered power.

Super Luminescent Diode (SLDs) are similar to LEDs, however they have the potential to be brighter.

Lasers
LASER (Light Amplification by Stimulated Emission of Radiation) is a mechanism for emitting electromagnetic radiation via the process of stimulated emission. Cold Laser light is:

In laser technology, "coherent light" denotes a light that is spatially constant waves of identical frequency and phase. The waves of photons are non-interfering. When interfering, two waves can add together to create a larger wave (constructive interference) or subtract from each other to create a smaller wave (destructive interference), depending on their relative phase. Two waves are said to be coherent if they have a constant relative phase. The laser's beam of coherent light differentiates it from light sources that emits incoherent light beams, of random phase varying with time and position. Laser light is generally a narrow-wavelength electromagnetic spectrum monochromatic light. LASERs can be pulsed (turned on and off quickly). Pulsing a LASER can allow what would normally be a class 4 laser to be qualified as a class 1 or 2 laser. Like with other electrical transmission equipment (cell phones, walkie talkies, etc) , power is somewhat proportional to range (or depth in the case of cold laser therapy).

Comparing LEDs and LASERs
So what is the difference between the light created by an LED and the light created by a LASER. The light from the LED is non-coherent and divergent. The divergence of the LED light wastes energy and may require special optics to focus the available energy into the desired areas. The second limitation, coherence, can not be corrected.


Lets look at an example to illustrate the difference in the ability of an LED or SLD to deliver energy when compared to a true laser. If you take a 100 watt LED light and stand about 20 feet way on a sunny day, you might not be able tell if the LED is turned on or off. That is because so much of the energy is lost in divergence, non-coherence and the output is distributed over a wider width of wavelengths. If you stand 20 feet away from a 100-watt coherent monochromatic non-divergent laser and look right at it, you might look like this. 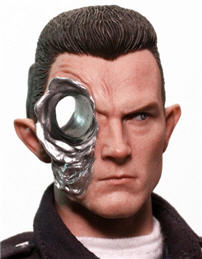 OK, the image is a bit silly but at that distance a laser can still cut through steel. Lasers put all the power where they are aimed. LEDs and SLD lose the majority of their energy.

The final answer is that both LEDs and LASERs can be used in cold lasers. LEDs are primairly used for superficial treatment, due to the basic properties of the LED. Although LEDs may have the correct wavelength, the controlled stimulation of deep tissues requires a coherent and focused beam of photons. The biggest problem is that LEDs are not efficient at getting the energy all going into the tissue. The efficiency (tissue energy/ output energy) is about 5-20% so you need a 15 to 20 watt LED to get the same tissue energy level as a 1-watt laser.

Also, LEDs cannot be pulsed so they cannot take advantage of using a higher power pulsed emitter which is both safe and powerfully (greater transmission distances). Because LEDs are just so cheap (often pennies a piece) , they are still widely used in cold lasers to target superficial areas. The combination of both LASERs and LEDs deliver photons to both the superficial and the deep tissue.