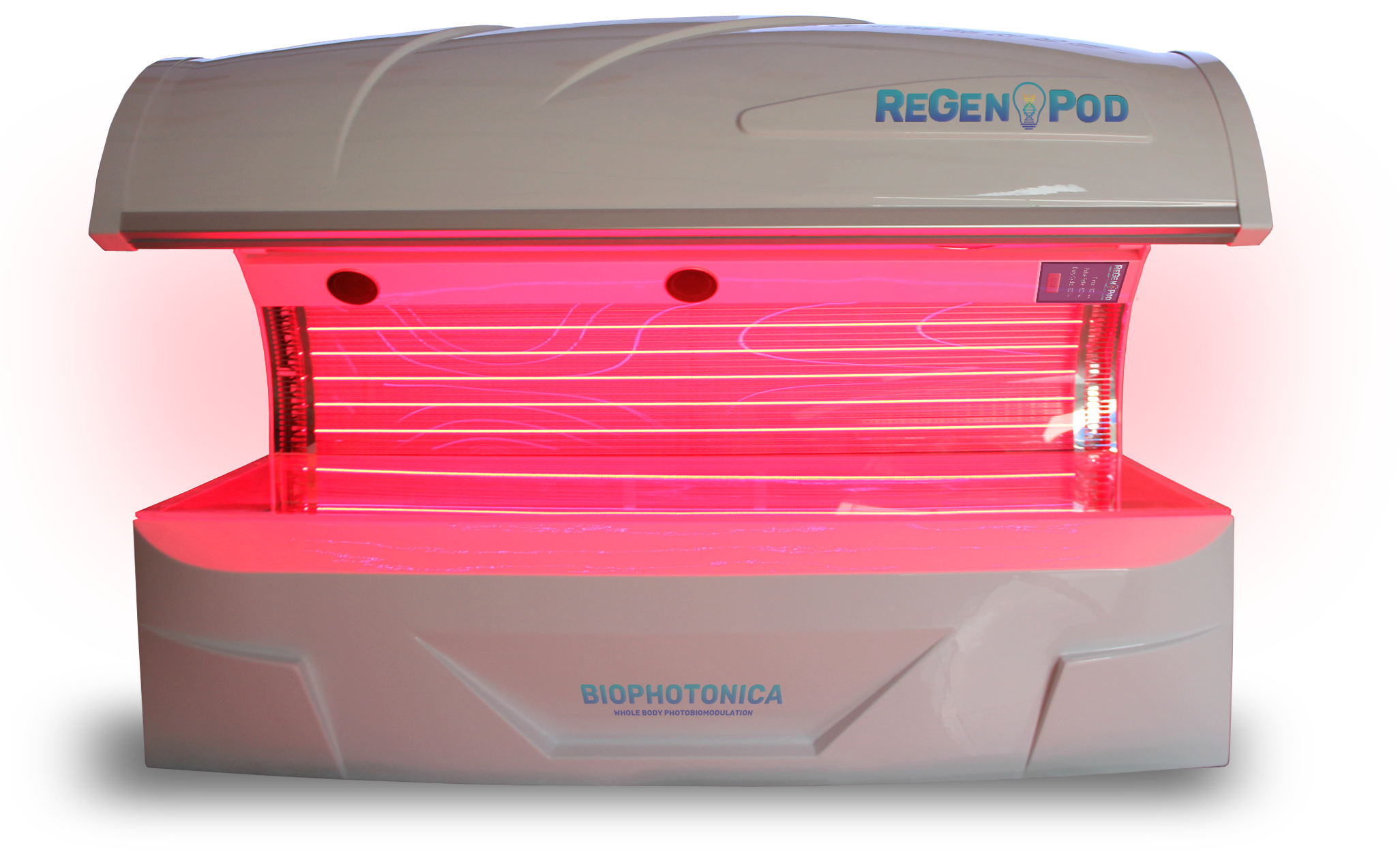 ColdLaser is very excited to introduce the ReGen Pod PhotoBioModulation (PBM) system. This whole body chamber does not use laser diodes but it uses similar core technology as the best lasers in the LLLT and HDLT markets and it does it at a power level greater than anything else available. For years, we have been seeing weak performance in the LED light therapy market because of limitation of existing products. Since LEDs are not coherent, they do not drive the energy as efficiently as a laser. Most existing systems are drastically underpowered and often LED systems are using the wrong wavelengths of light (using mainly red lights like they use in the cosmetic markets). Most of the existing LED system do not offer controlled pulsing. This is why existing systems have not provided the same performance as cold lasers. But this might change with the ReGen Pod. Recent technology improvements and research in laser therapy have come together to allow the ReGen Pod to overcome these limitations and take light therapy to the next level.

The ReGen Pod is FDA registered.

In the world of therapy lasers, there are several core concepts that ColdLasers.Org has used to train people over the last 10 years. Now the ReGen Pod uses these principal to produce a pod that is the state-of-the-art in LED PBMT:

So what makes the ReGen Pod so spectacular? If offers a quad-wavelength system with independently controlled pulsing and continuous output with multi-step prgrams. This makes the system more flexible and superior to the most expensive and best engineered lasers in the world.

The other big break-through on the ReGen Pod is the fact that the system can be used unattended. It can actually be used as a self-serve pod with unlimited accounts. The cloud connected system allow professional to create user accounts so that the user can log in and chose from a set of programs. The system tracks user treatments and even monitors progress to constantly improve the treatment plans. Here are a few more advantage of the ReGen Pod. The ReGen Pod comes in 3 different levels. The S3 system is designed to be simple to use for home user who do not need much flexibility. The Q series of system offer the ultimate in control of every key variable that is significant in laser therapy applications. This system is NOT FDA cleared.

Here is a chart that shows how the ReGen Pod crushes the competition.

The ReGen Pod will put your business and your customers "light years ahead of the competition."

Read more about the ReGen Pod on the manufacturers website.

Here are a few reasons to buy from ColdLasers.Org

Copyright 2022 ColdLasers.Org Sitemap | Terms Of Service | Return Policy |ColdLasers.Org sells cold laser systems and accessories. We have aggregated information from many manufacturer to help consumers learn about all their options. This information is for reference only and is not medical advice. The information provided through this web site should not be used for diagnosing or treating a health problem or disease. If you have or suspect you may have a health problem, you should consult your local health care provider.